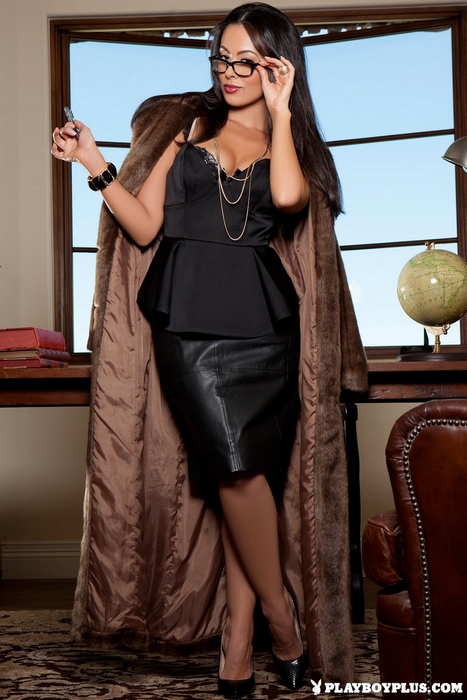 Ashley Doris, Playboy’s Playmate of the Month in March 2013, was born in West Hartford, Connecticut on November 1, 1989. She was the first Playmate ever from the state of Connecticut. She connected with Playboy while vacationing in Las Vegas. “My friend and I were waiting for an elevator, and we were noticed by a casting agent. I went in for a test shoot, and three weeks later I was booked.”

“I had a great time at my Centerfold shoot,” she told Playboy. “The house we shot in was perfect and had one of the best views I’d ever seen. I loved my hair and makeup, and I loved the clothes – while I was wearing them, I mean.“

Ashley gets lots of questions about her ethnic background. She said her mom is half black, half Spanish and her dad is half English, half German.

Before she was a Playmate, Ashley Doris spent 15 years studying and performing dance, including ballet, jazz, hip-hop and pointe. She has also studied martial arts, earning a brown belt with three stripes. Ashley began modeling in New York when she was 19 and has worked with dozens of notable companies such as Reebok, Adidas, Toys ‘R’ Us, Hasbro and Disney. She has appeared on billboards for Beautiful Addiction clothing and the Wynn Hotel. After being discovered by Playboy, Ashley relocated to Hollywood with her dog, Marley. She was cast as Main Chick in Kid ink’s music video “Main Chick” and modeled as a mermaid for Disney’s “Deep Blue.” She told Playboy her plans for the future include getting her college degree, owning her own real estate business, and hosting parties as a Playmate.

Romantically, Ashley looks for “a guy who understands my frisky humor and loves to get down on the dance floor with me.” Her biggest turn-off is “liars.” “Don’t white lie to make yourself seem cooler than you really are. Honesty is not only the best policy, it’s sexy,” she said.